Our why: Re-Imagining the traditional Timesheet and Punch clock. 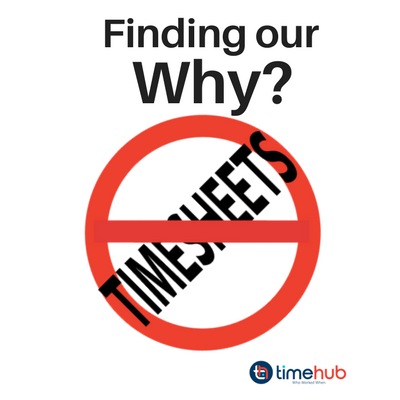 Our why: Re-Imagining the traditional Timesheet and Punch clock.

Recently I have been thinking a lot about who we have created TimeHub for and Why? While thinking about this I relistened to a podcast I was interviewed for a few months ago.

It's alway interesting when you hear a recording of yourself and notice what parts of the interview the intonation changes i.e where there is more passion & enthusiasm.

What I detected was, the section where I was talking what we were doing with our new venture (which became TimeHub) was when I felt and sounded the most engaged and felt the buzz of talking about creating something new. This was because I was talking about creating something which will have an impact on both employees, payroll people and the businesses which employ them.

This is our WHY....and why we are so focused on re-imagining time sheets and time clocks.

Here is a transcript of that part of the interview. In particular the copy in bold:

Ryan: So as you’re now moving back into the software side and, it’s a very different market place from nearly ten years ago. It’s very much cloud based.  You probably have a lot of time to be able to research where it’s going to go in the future, paint that vision. Where is payroll in the future and how do you want to play a part in that?

Steve: The cloud is an interesting space because payroll people live and die on trust, and there’s still a trust issue with the cloud. There are still people who we talk to on a daily basis who say, no I don’t want my payroll system in the cloud, but who will then turn around and use their internet banking system. So they don’t trust the cloud for payroll but they do trust it for their banking, which is crazy, but that’s the case. I recently spoke at a couple of conferences and there were 100 people there. Of those 100 payroll managers, from companies of all shapes and sizes, there was less than five percent who were currently running their payrolls in the cloud.

Ryan: Is that right?

Steve: 95 percent of them were still using PC based solutions.

Ryan: In the own office or PC based by a supplier?

Steve: Either in their own office or through a supplier. So I think the cloud will grow but it will be a long time before it can grow in volume. For the bigger employers running the big systems in the cloud can be problematic just from the scope of the software, using it through a browser and all those sorts of things. For small to medium employers, so the Xero target market, it will grow, but for me, the challenge will be that payroll is such a specialist area. A lot of accounting software companies over the years have gone away from doing payroll because it’s too hard. Things like legislation and tax changes in the New Zealand situation changes at least twice a year. So if you’ve got an accounting package and you're adding a payroll to it, you probably don’t ever have to update your accounting package very often, so if you're PC based that’s easy, but of course once you’ve got payroll you’ve got to send an update every time there is a payroll change. So that’s where the cloud will take over as that updating and always can be handled in that scenario.

What we will see more in the near term is the peripheral add on products, so how do you capture your time, how do you process your time. How do you deliver the information? That’s where I see the cloud coming into its own. The "cloud" is a great tool for capturing and delivering information.

Ryan: So more the visibility, the dashboard, that type of presence in management.

Steve: Yeah, how does the employee fill in their time sheet? Do you still fill in a piece of paper that nobody can read and nobody can add up or do you use a mobile phone, or browser or a tablet or a time clock? So capturing information and analysing the information is key. If I’ve got a time sheet, I’ve got to sit down and work out that you work from 8.15 to 4.25, what does that look like in reality? It was interesting talking at this conference, that the number of attendees whose employees still fill in time sheets. What you’ll find is when somebody fills in a time sheet, is that they are the most accurate employee in the world, because they’ll always write down that they arrived on time, and they’ll always write down that they went home on time, and nobody’s that accurate in reality. So I think that’s where the next wave of innovation will be. It’ll be the capture and it then will be the delivery of information. So employee portals, where the employee can go online and look at their leave balances and put in a leave request. They can change their roster.

Ryan: So this type of software could be a massive time saver for anyone who has a large number of employees or particular seasonal employees or anyone where you’ve got to manage that staff in stop time.

Steve: Yes, absolutely. If you think about, especially someone in an area like Hawke’s Bay, if you’re running a gang of horticulture workers, how do you capture their time?

Steve: So I think that’s where again, the more you speed up and make more accurate the data capture process, then the more time the payroll office has got to manage the payroll.

Ryan: Well I think what’s fascinated me about that is you’re moving the foundation of payroll but it’s actually about managing profitability because one of the biggest costs in any statement of financial performance is going to be people. So if you can more accurately define that, then you can forecast your costs in a better way.

Steve: Absolutely, and what you also find is you’re empowering your employees because they want to trust that their pay is right.

Steve: And if they’re responsible for capturing their own information, they’ve got a bigger stake in the game. Where as if they’re trusting somebody else to work out the time sheet or work out their time and then key it into a payroll system, there’s an opportunity for error. What could those errors cost? Even if you could say that you're 99 percent accurate all year, all the time, that’s fine, but what’s that one percent of your Payroll costing? For most business’ it’s huge. So there’s a potential if you can fix that one or two percent, then you’ll save money and there are costs obviously all the way down the track not only the paying of the staff, but the effect of that job costing or the processing they’re doing, what their performance is looking like, you know the reality of actual performance versus theoretical performance and that’s where I see the change is going to come.

If you would like to listen to the full podcast you will find it here along with the other 99 CEO Interviews Ryan Jennings did in his 100 NZ CEO Interviews Podcast Series: